Character display that is commonly used these days are called seven segment displays because they are easy to read under low ambient light. Another type of display is called LCD display which are useful in low power or battery operated system.


Seven segment display can be divided into 2 types of connection. One is called common anode of which all the anodes of the LEDs are connected together, leaving the cathodes open for connection.

The other one is called common cathode of which all the cathodes of the LEDs are connected together, leaving the anodes open for connection.

The figures below show a simplified display where there are 8 LEDs on one display. Each of the LED can be turn on or off by controlling the signals to each LED. 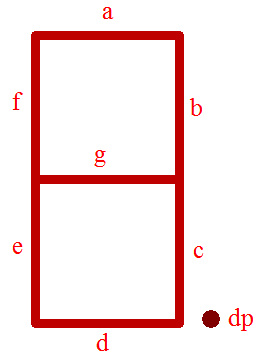 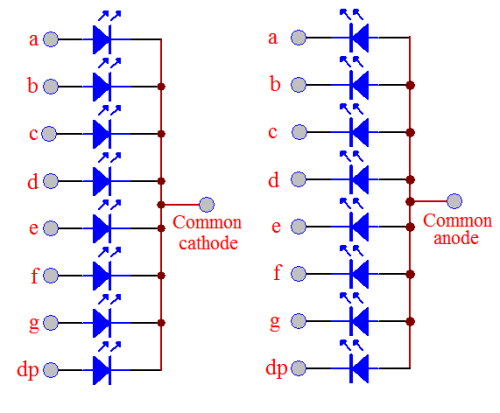 A numeral to be displayed on a seven segment display is usually encoded in BCD form, and a logic circuit driver ON or OFF the proper segments of the display.

The multiplexer logic sends input data for a digit into the encoder and enables the common element of the correct digit. This process is repeated for each digit. The segment is energized only when both a segment and its associated common lead are selected. With this system, only one digit is energized at any instant, a factor that reduces the power supply requirements of the system.

When using multiplexing, ensure that the peak and average current specifications of the display is adhered to.